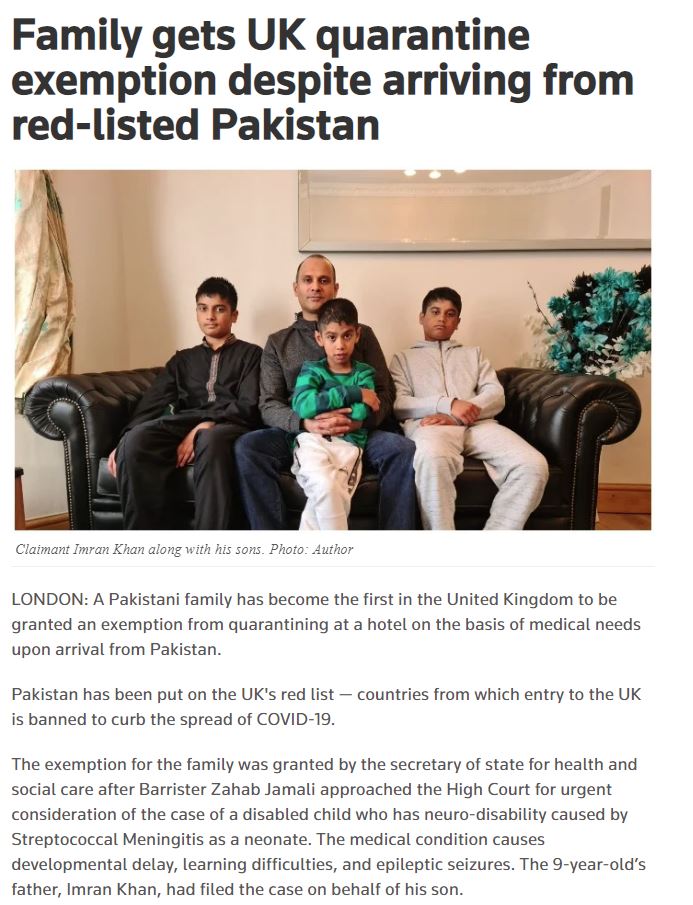 LONDON: A Pakistani family has become the first in the United Kingdom to be granted an exemption from quarantining at a hotel on the basis of medical needs upon arrival from Pakistan.

Pakistan has been put on the UK’s red list — countries from which entry to the UK is banned to curb the spread of COVID-19.

The exemption for the family was granted by the secretary of state for health and social care after Barrister Zahab Jamali approached the High Court for urgent consideration of the case of a disabled child who has neuro-disability caused by Streptococcal Meningitis as a neonate. The medical condition causes developmental delay, learning difficulties, and epileptic seizures. The 9-year-old’s father, Imran Khan, had filed the case on behalf of his son.

The child travelled to Pakistan with his mother on March 31, 2021, to attend a funeral. The family tried to book the tickets back to London but the UK decided to put Pakistan on the red list. According to the family, airfares to the UK had become unaffordable for them following the announcement.

The family booked the tickets to reach London on the morning of April 27, 2021.

The court was informed that the child claimant is totally dependent on his mother due to his disability and would be unable to communicate his needs if he is made to undergo quarantine in the hotel. The move will have a serious detrimental impact on his emotional health and wellbeing, the claimants said.

The family wrote a letter to the National Health Service (NHS) on April 5, 2021, for the first time, following which at least a dozen more exchanges took place between the two parties no help was offered for exemption.

The claimants also wrote to the local MP and passed on medical reports and supporting letters from consultant paediatric neurology, paediatric consultant, school nurse special needs and a senior social work practitioner. The MP was requested to write to the exemption team at the NHS.

On April 26, 2021 — after no positive response was received — Barrister Jamali prepared and lodged the application at the High Court for urgent consideration.

The lawyer argued that if the defendant (Secretary of State for Health and Social Care Matt Hancock MP) did not grant exemption to the claimants, then the defendant will be in breach of Articles 5 and 8 of the  European Convention on Human Rights (ECHR). Therefore, the defendant must exercise discretion in favour of granting complete exemption to both the claimants from hotel quarantine.

On Tuesday morning, the claimant reached London Heathrow Airport and directly went home from there.

“Over the last few weeks, we had been desperately trying to get a medical exemption for my son who has a neuro disability but they did not help us at all. If it was not for Muhammad Zahab Jamail and his team, then my son and wife would have to endure a great deal of distress and possible danger.”

Separately, the health secretary has stated that he will need a week to respond to and address the issues raised by Barrister Rashid Ahmed in a petition to take Pakistan off the red list.

In a letter to the lawyer, the legal department has said it will need time to seek legal advice on the current status of Pakistan being on the red list along with nearly three dozen other countries.

In the petition, Barrister Rashid Ahmed had argued that the UK’s action to add Pakistan to the red list was unreasonable, unlawful, and irrational.